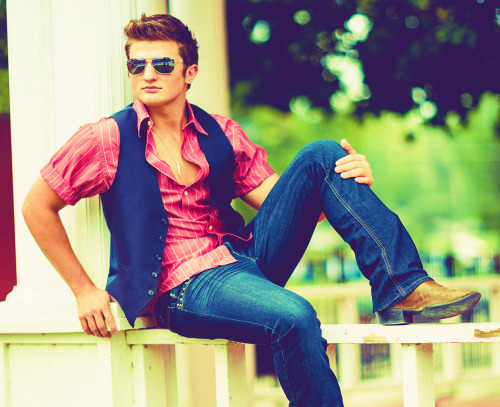 “This is the second album I’ve ever released; I’m 19 years old now”. While it takes most artists decades to release two albums and have two songs in the top 75, it has only taken a few short years for Mitch Goudy. #ROWDIE, which was just released on Tuesday, is written and produced by the Iowa native, and every song contains a different feel and story. As a fellow 19-year-old, I was fortunate enough to talk to Mitch on the phone the day his album was released about his music, his recent partnering with the fashion label STRUT, and more.

1. Congratulations on the release of your album! What has today been like for you?

It’s a hard thing to explain really. It’s very exciting, but it’s also nerve-wracking. Oddly enough, you’re always being a creative person; I’m already thinking about what I want to do creatively next. But I’m also very, very excited. It’s so cool seeing all these tweets about these songs. On this album, I produced all the music and played a lot of the instruments. I was part of the engineering, and I wrote all the songs on the album, too, so I was heavily involved. When you write an album, you’ve known about the songs for a year or so, so it’s funny when it’s released because everyone’s like “Oh, all this new music!” and you’ve heard the songs a 100,000 times, but it’s something that is so overwhelming to feel.

2. How does #ROWDIE compare to your other albumWild?

It’s completely different, I’d say. This album is called #ROWDIE, and I started playing the songs when I was out on radio tours. So I’ve gotten to travel all over the place. My thing was, when I was going to these country concerts – I love them, I love country music – but if you look at my iPod, I’ve got everything on there. You would think I like country music, but you’ll see everything from reggae to screamo to dubstep. I like it all and that really rubbed off on my music. I’ve gone to a lot of country concerts, and to me they all started to sound the same, and that was okay – they all sounded great and I’m definitely the opposite of a hater – I love all country music. But for me personally, I didn’t want people to get into a few songs on my album, and go, “I’ve heard it all”. I want every single song to be a different page and a different flavor. So that was where we went, which is kind of unheard of in country music, and what country radio started calling it is hybrid country. I’ve never heard it called that before, but if it becomes a thing, I’ll be pretty dang excited. It really was just something that came from my imagination; it’s what I love.

3. What made you want to pursue music as a career? Did you always know that’s what you wanted to do?

No, not really. I’m pretty young, so I’d say I found out pretty quick. I used to be real big into sports, but I got a knee injury when I was younger, and that’s when I really couldn’t play sports anymore. So that week I was on the couch and I really couldn’t walk around because my knee was hurting so bad. My dad brought home a guitar and said, “You’ve been dancing and singing Garth Brooks since you were three years old; now maybe you can make some noise with this”. So he brought home a teach yourself guitar book, and it sounds so old fashion, but I turned on the radio and just started playing along. That’s how I learned, by just hammering it out and that’s why when I go down to Nashville, they’ll say the way you play guitar is really unique, and that’s because nobody taught me. But I will say for anybody out there, sometimes a tragedy turns out to be the best thing that ever happened to you.

4. What has been the most memorable moment of your journey so far?

That’s tough, but I’d say this album has probably been the most memorable moment. It’s just been a huge learning experience, and it’s also been a test of my endurance and how bad I want it. I was involved in every single aspect, and I had to learn as I went. The album is truly me; every single note on that album, I was a part of to help pick out and to help play. It’s just a really cool moment for me. I’ve had some other awesome things happen; I’ve met some great people, and I’m not taking any of that for granted, but just to have an album that is exactly what I want, to put my talents to use, and to push myself has been really awesome for me.

5. I know you recently partnered with the fashion label STRUT. Have you always been interested in fashion?

You know, when you grow up in southeast Iowa, there is kind of a certain way you dress. But I was always kind of ‘that kid’, and I always liked fashion. Now, was I going to go to fashion school? No. But I’m a very creative guy, so I always had ideas about fashion. So when this opportunity came and I met Rachel, it was one of the coolest moments because she was like, “What do you want?” And I’m sitting there like ‘I have no idea’. So we just sat down and I started hammering out some of the craziest ideas, and then it took a few months. Then, all the sudden, she came with this whole rack of clothes, and it was just a surreal moment because what I had imagined was exceeded. She took some of my ideas and made them way cooler. Modeling for her has been awesome, and I am jacked for the clothes because I like to do things completely different, and nobody owns these clothes, and hopefully soon they will.

About the Author : STRUT