In a mix of denim, luxurious gowns, and sex appeal that can only be described as true American fashion, STRUT designer, Rachel Gisch, and her team descended on VP Studios for a day of fast-paced shooting in early April to document months of work in the label workroom. In a departure from the more traditional ready-to-wear collection of 2014, this array of pieces represent a more visionary side of the brand that was captured in classic photographs reminiscent of old Hollywood, dripping with glamour. Included were heavenly jeweled couture gowns, such as the one pictured below, and a menswear evening look equally divine in texture and construction. 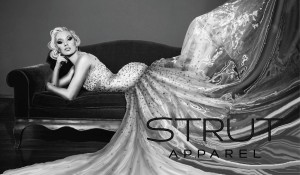 Returning to represent the STRUT brand for 2015 is charting Nashville Recording Artist, Mitch Goudy. Goudy joined favorite STRUT women’s wear model, Melanie, in several shots – including one that is too hot to print just yet — we want you to wait for it.

Goudy continues to #STRUT his stuff on stages around the country wearing exclusively STRUT Apparel clothing. His old favorite, the STRUT Signature Jean, got an overhaul this year and is paired below with his new favorite, the #HybridCountry t-shirt. 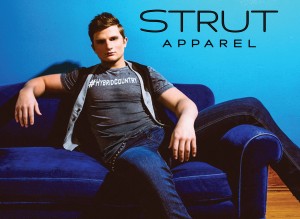 After a long day’s shoot including dozens of looks, thousands of photos, and eight different hairstyles we are almost set to unveil the STRUT Apparel 2015 collection. It proves that whether you live life on the ranch, enjoy the view from a downtown penthouse, or reside somewhere in between – there is always a reason for you to #STRUT.

About the Author : Diana Upton-Hill